Media habits are changing at an exponential rate as consumers find new paths to viewing television programming, creating much confusion for advertisers in how to reach their prospective audience. The majority of broadcast television viewing is via cable and satellites, however, the rate of disconnect is alarming. Streaming video through internet access is rapidly changing how advertisers allocate funds and purchase media buys.

Local television stations no longer reach 99% of their market. While the top rated stations in a market may reach approximately 80% of a market, weaker stations are only reaching 50-60%. Some cable networks, such as HGTV, ESPN, FOX NEWS, HALLMARK, etc, are achieving audience ratings higher than some local stations. And, service providers such as Netflix are creating exclusive programming. The playing field is getting very crowded!

In today's media world, not only do viewers have a massive choice of what they want to watch, they also can choose how they access these programs. Rather than connect via cable or satellite, consumers can access live streaming television via internet with such services as Direct TV Now, Hulu, Sling TV, YouTube TV, and the list goes on and on!

No longer do you need to be sitting in front of a television set in your home to watch television programming. Cutting the cable cord provides much freedom allowing to stream live TV from anywhere. Depending on your streaming service, device, and market availability, you can stream local broadcast stations and your regional sports live while traveling in the US.

In addition to connected television sets, TV programming can be accessed via desk top computers or mobile computing devices such as smartphones, tablets and laptops. Viewers can watch what they want, when they want, and now where ever they want. Now advertisers must seek new ways of reaching these disconnected viewers which currently account for 30% of the US and rapidly growing.

Broadcast and cable television still attracts the highest ad revenue, however, live streaming video in encroaching on this giant medium.

Purchasing television advertising has always been done by achieving gross rating points (GRP's) which consists of reaching a percentage of unique viewers within a market times the number of exposures to your ads. The formula GRP's = R x F. To build effectiveness, advertisers will increase their reach by adding more stations/networks and daypart time periods to their buys and by adding more spots to build more frequency of exposures.

This "machine gun" approach has consistently delivered top of mind awareness and credibility to advertisers willing to invest largely in television. However, with rising costs and fragmented audience ratings, advertisers are seeking to improve their Return on Investment (ROI).

The Language of Digital TV

The emergence of digital TV provides advertisers with new options to target their market and more effective tools to measure audiences and marketing conversions. As digital advances, terminology can be confusing. Media reps normally selling broadcast television, cable, radio, newspaper, whatever, are presenting their own versions of digital which now seems like we're building the Tower of Babel with everyone speaking a different language.

Understanding some of the definitions:

Whereas buying broadcast and cable advertising is a "machine gun" approach, buying GRP's, reach and frequency, digital buying is done programmatically using research data and computer software to target a specific prospect as a "sniper" singles out their target.

Programmatic buying, while not building broad top of mind awareness, singles out the prospects "most likely" to buy your product or services. This results in lower cost because of less wasted coverage.

Digital TV used in conjunction with other digital media, such as pay per click, retargeting and geo-marketing, drive prospects to your website and conversions can be tracked. This synergistic marketing allows for more precise advertising that delivers measurable results and the ability to fine-tune media strategies to improve your return on investment.

Learn How Digital TV Can Benefit Your Business

While TV remains the dominant medium, how you view and advertise on it is changing rapidly. If your advertising dollars are not generating a strong return on investment, it may be time to make a change. Surprisingly, it may cost you less money than you are already spending! For strategic media thought leadership, contact the Media Power Team today! 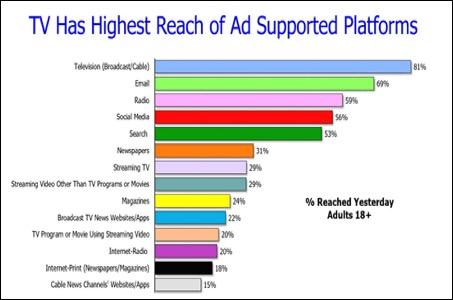 Tweet
More in this category: « Why Blogging On Your Website Is Important Audience Measurement Methodology Is Changing How Advertisers Buy TV »
back to top

Please select one or more of the options below or type a phrase in the search box.

Want the details on how we've successfully helped dozens of businesses optimize their marketing strategies and reach countless consumers? See what our clients have to say and learn how our media strategy can help your business excel.